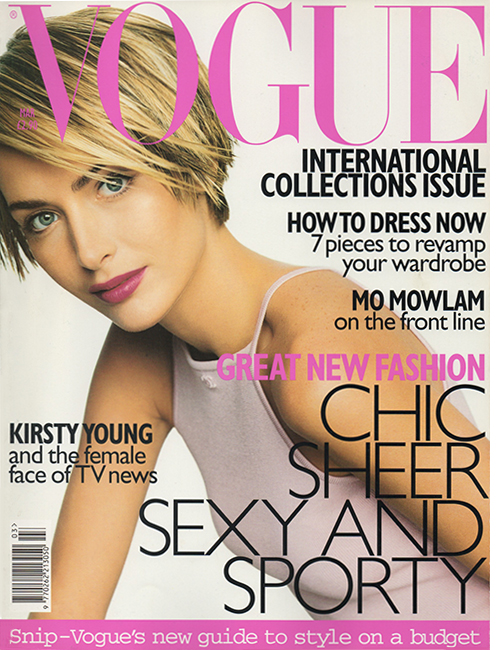 Paris in April – wonderful, except that I was sitting in a sea of plastic. I was a guest at a chic dinner party, and all around me were unbelievably immaculate women of at least my age – somewhere over 40 – looking horribly young. At first I thought it was the lighting and that the reason I felt so insecure was fatigue. Then it dawned on me – they’d all been to Hoflin, Baker, Kamer, Sebag or some other plastic surgeon. I went home and felt wretched; the last thing I wanted to do was go under the knife and come out with a dead, pulled face. Collagen or silicone was not an option: I faint at the mere sight of a needle.

Back in London, scrutinising my face in the bathroom mirror, I despaired: it looked like the Nazca Plains, I had to do something, but what? Later that week, as I was waiting in the doctor’s office for my monthly dose of vitamins, I noticed a magazine piece written by Leslie Kenton. Thanks, she said, to Beth Gagnon’s facials, she no longer needed to contemplate the dreaded word ‘facelift’. I grabbed the article as though it were gold dust and cried, ‘Forget the pills! I want this and I want is now!’ The receptionist, being French, shrugged her shoulders and told me: ‘Ah bon, you ‘ave to wait for zat. We’ll call you.’ I told her that for this (whatever it was) I’d even rise at dawn, not one of specialities. She had to fit me in as soon as possible.

Three weeks later, I received a call: ‘Beth Gagnon has a cancellation – she can see you tomorrow.’ I’d almost forgotten what it was the appointment was for; still, I trotted to her office on Weymouth Street. ‘My face,’ I spluttered to a beautiful wrinkle-free woman in her mid-thirties, ‘It needs help.’ This was Beth Gagnon. She led me into a room containing a bed adorned with crystals and magnets. No ordinary bed, it was designed by Beth and her husband Bob Jacobs in 1981, to help relieve stress in the body and heighten tissue repair and wound healing, and to improve immune functions and eliminate allergic sensitivities.

I lay down. My face was covered with a heat-sterilised lavender-scented towel and then cleansed. A round black disc rather like a mini hot-water bottle was placed on my chest – this, another of Bob Jacob’s inventions, is in fact a scalar wave generator. This is designed to work on the body at a subatomic level, helping body and psyche by restoring energetic order and the balance of the immune system. Some people use it when travelling, maintaining that it gets rid of jet lag and helps maintain high energy levels.

Next, Beth started to massage my face with ‘gel’ she’d developed with Bob. This inoffensive-looking transparent balm works miracles on any kind of wound or swelling; one of its ingredients is caesium, a healing mineral originally discovered by the Chinese and used by them in conjunction with acupuncture. Over The Gel she applied castor oil; I was then smothered in an icy mud mask. To my temples she applied six little electronic pads, which conduct microcurrents that work on muscle tone (what muscle tone?). Then my face was left under a hot lamp for 20 minutes. This is when I normally freak out, suffering from boredom and claustrophobia but, on this occasion, I lay there blissed out with Beth massaging my feet until the sound of someone snoring woke me up. It turned out to be me.

My first treatment was over. When I looked in the mirror my face appeared much lighter, as though I’d had a year’s sleep: my skin, baby-soft. Beth explained that she’d used a light laser to accelerate external and internal healing of all forms of skin problem (including ageing), plus microcurrent prongs that tone the facial muscles at a deep level. I loved the results. Beth said that patients usually follow a course of anything between 12 and 30 sessions; the most important thing is to build up the regeneration slowly through the layers of skin and muscle tissue so that once finished, the whole process only requires an occasional topping-up. I was hooked.

When I got home, my daughter Tara gaped at me and said: “Mum, what have you done? You look amazing.” I shrugged and replied: “I’m just having a good day!” I rushed to the mirror and then the phone to book another 10 appointments, fearful that someone else might use up my time.

That night, at a dinner party with old friends, each and every one of them remarked on how well I was looking. One particularly dear pal yanked my hair back looking for scars – evidence of a facelift. Two days later, I returned. Beth explained that the skin rejuvenation process works best if one starts with at least three intensive treatments in the first week, to allow the muscles to build up from the bottom layers of skin upwards. The treatment also incorporates a light-beam generator, which uses electrostatic energy to repolarize the cells, enhancing cellular repair and lymphatic drainage, and destroying bacteria.

On my third visit, I truly forced myself to stay awake to learn more. For instance, I learnt about the microcurrent prongs, which are dipped in husband Bob’s miracle product ‘Phenomena’ (a spray made up of liquid collagen, arnica, calendula caesium, and much more), and then travel around the face as though on a training circuit, defying its ultimate law of gravity.

I looked in the mirror after my fourth treatment and was stunned to see that my nasty smoking lines (hitherto deep rivers that I had called Seine and Loire), caused by my last remaining vice, had virtually disappeared. I left Beth’s office ecstatic, which probably explains why I immediately walked headlong into a tree, scraping most of the skin off my thumb. I reached my next appointment dripping blood so I went straight to the ladies and smeared the magic ‘gel’ on. Within minutes, the throbbing had ceased. The following day there was barely any trace of the wound.

My facials continued three times a week and, boy, did I get a lot of naps in (I never knew a person could snore so much). The youthful-looking Beth Gagnon (who turned out to be 46) had to leave to attend a seminar in Switzerland, and her co-worker Jane Allen, highly trained in Beth’s technique, took over. Where Beth’s hands are light and soothing, Jane’s are forceful; she positively purred like a contented cat as she felt the new muscles rippling up my face.

After 11 sessions it was time for my summer break. I fretted that my face might collapse in the sun, but with obsessive use of the ‘gel’ and the ‘Pheonomena’ spray, it emerged virtually unscathed from the Long Island sun. Back in London, I resumed my sessions. They didn’t need to be so intensive now the groundwork was done and my cheekbones were firmly in situ, but I couldn’t bear to stop. It paid dividends last week, when the ex-love of my life came to town. Over lunch he – formally so critical of my innumerable flaws – said: ‘Are you in love or have you had a facelift? Your skin, your face: I’ve never seen you so glowing.’